This year marks the 50th anniversary of TROPICÁLIA. The movement shaped in 1968 with the album “Tropicalia Ou Panis Et Circencis“, which was a product of a collective effort of the movement’s key artists GILBERTO GIL, CAETANO VELOSO, GAL COSTA, OS MUTANTES, TOM ZÉ and NARA LEAO.

TROPICALSIMO would become a short-lived but highly significant cultural movement with a vibrant, multi-disciplinary blossom, ranging from music to poetry, films, theater and visual art.
Tropicália combined psychedelic rock with the avantgardistic approach of musique concrète and ever-changing elements from Afro-Brazilian traditions to Brazilian folklore to Bossa, Funk, Soul and other popular music genres from that period. It was adventurous, mixed high art with mass culture and stayed open to influences of any kind.

We are delighted to have an acknowledged Tropicália expert as our guest for this Saravá edition: the Brazilian blogger, music journalist, and record collector BENTO ARAUJO. Araujo’s book “LINDO SONHO DELIRANTE – 100 PSYCHEDELIC RECORDS FROM BRAZIL (1968-1975)” is one of our favourite books on Brazilian music. It celebrates the inventive and mind-expanding music produced in Brazil in the context and in the wake of Tropicália and has become a reference for researchers and record collectors.

Bento just finished his second book “LINDO SONHO DELIRANTE VOL.2: 100 DARING RECORDS FROM BRAZIL (1976-1985)“ and he’s coming to Frankfurt for a DJ SET & LECTURE based on his research for both books. A limited number of books will be available for sale.

♫ BENTO ARAUJO ♫
Journalist and music critic for newspapers Folha de São Paulo and Estadão (SP). Writer for Rolling Stone Brazil. Editor of the magazine POEIRA ZINE, producer of the podcast POEIRACAST and author of the books LINDO SONHO DELIRANTE VOL 1 & 2. Within the scope of his journalistic work Bento has made personal interviews and collaborations with many legends of Brazilian music. ♫ 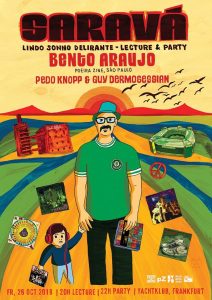